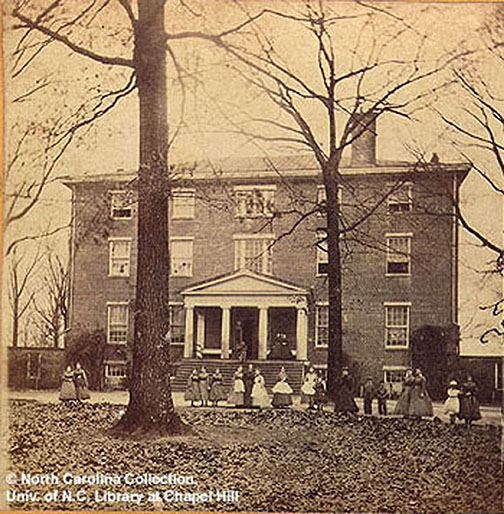 Saint Mary’s School has been a leader in education for young women since its founding in Raleigh in 1842.

With the support of the Episcopal Diocese of North Carolina, the Rev. Aldert Smedes founded Saint Mary’s as a school for young women, "designed to furnish a thorough and excellent education equal to the best that can be obtained in the city of New York, or in any Northern school." The school was founded on the site of the Episcopal School of North Carolina, a short-lived school for boys in the 1830s. Three of the present school buildings―East Rock, West Rock and Smedes Hall―formed the original campus. East Rock and West Rock, the first two buildings, were constructed with remnant stones from the construction of the North Carolina state capitol.

History tells us 13 girls, The Original 13, arrived on May 12, 1842, for the first day at Saint Mary's. A total of 21 students enrolled for the first session. The school has operated continuously on the same site in Raleigh ever since.

The historic core of the school's 23-acre campus is listed on the National Register of Historic Places. The Saint Mary’s Chapel, designed by Richard Upjohn and built in 1856, is a National Historic Site, and five of the school’s 25 buildings are Raleigh Historic Properties.

The school, which formerly included a two-year college program, transitioned to a four-year high school in 1998, and the name reverted to Saint Mary's School, the original name of the institution when it was founded in 1842.

For a more detailed history of Saint Mary’s School, search for a copy of The Heritage, written by Saint Mary’s faculty emerita, Martha Sprouse Stoops.