Saint Mary's Head of School Dr. Monica Gillespie is pleased to announce that Kristin Cooper, the First Lady of North Carolina and a past Saint Mary's parent, has accepted the invitation to serve as Saint Mary's 2017 commencement speaker. Commencement exercises for Saint Mary's historic 175th academic session will be held Sunday, May 21, at 10:30 a.m., in the Grove. Seventy-seven members of the Class of 2017 will graduate that day. 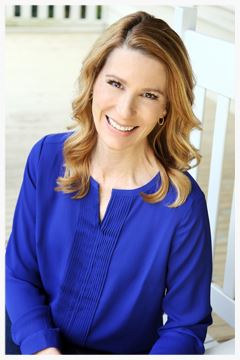 Kristin Cooper is honored to serve as the next First Lady of North Carolina, a state she has called home for nearly three decades.

In her role as First Lady, Mrs. Cooper is working to improve the lives and well-being of children in North Carolina. Her focus is on childhood hunger, literacy, foster care, child abuse and neglect, and the arts. Most importantly, she is shedding light on how all these issues integrate to ensure the social and emotional health of children in our state.

The daughter of Geri Bernhardt, an artist, and Sam Bernhardt, a Vietnam veteran and physician, Mrs. Cooper grew up in Oklahoma City along with her three younger sisters. She attended public schools, earned her undergraduate degree from the University of Oklahoma, and then attended Campbell Law School in North Carolina. After graduating law school, she worked as a staff attorney to the legislature in Oklahoma and North Carolina.

It was at the North Carolina General Assembly that she met a young legislator from Nash County named Roy Cooper. After they wed, the Coopers settled in Rocky Mount. While Roy served in the legislature and practiced law, Kristin concentrated on their busy family life. The Coopers have three daughters, Hilary, Claire, and Natalie, a 2011 Saint Mary's graduate. Mrs. Cooper and the girls enjoyed singing and acting in local theater productions, with all four appearing on stage together in Camelot.

After Hilary graduated high school in Rocky Mount, the family relocated to Raleigh to be closer to Roy's job as North Carolina Attorney General. Natalie and Claire finished middle and high school and spent many hours at the Raleigh Little Theater, where Kristin served as a member of the Board of Directors, booster and ticket taker--and played the role of mother in many productions.

Enjoy this feature about Mrs. Cooper in Raleigh Magazine.

All are invited to attend the outdoor commencement in the Grove at Saint Mary's.