The Mary Lou Jones Saint Mary's School Athletics Hall of Fame has been established to recognize and honor outstanding athletic achievements and/or contributions and support of the athletics program at Saint Mary's and athletics for women and girls within and beyond the school.

Saint Mary's rich athletics tradition is built on a foundation of talents, dedication, and tireless efforts of many throughout the school's history; thus the school chose to launch the Hall of Fame in 2017 as part of the celebration of 175 years of excellence in educating young women.

Saint Mary's launched its Athletics Hall of Fame with an awards and induction ceremony, April 7, 2017. "As we celebrate the hard work dedication, accomplishments, and foresight of so many that came before us at Saint Mary's, we establish this prestigious recognition of extraordinary achievements in athletics and to pay tribute to the ongoing work of so many who have created a proud tradition of excellence throughout the years," said the head of school at the ceremony.

The following will be considered for nominees to the Mary Lou Jones Saint Mary's Athletics Hall of Fame: 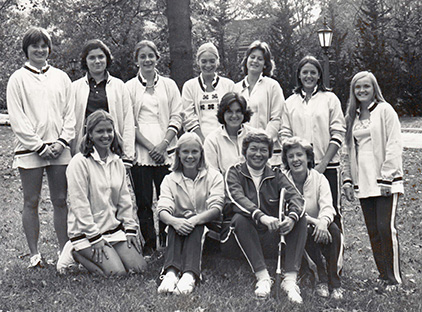 The inaugural class of inductees into the Saint Mary's Athletics Hall of Fame includes beloved former chair of the physical education department, coach, teacher, and dean of students Mary Lou Jones and her undefeated college tennis teams of 1975-1976 (18-0) and 1976-1977 (16-0). These teams boasted a 34-0 combined record over the two years, including fall and spring seasons each year, in intercollegiate competition with all colleges and universities in North Carolina and beyond, including teams from each of the ACC's Big Four universities – Duke, N.C. State, UNC-Chapel Hill, and Wake Forest.